Does Red Meat Cause Cancer?

I am an evidence-based nutritionist and I am also vegan. This puts me in the intersection of both these groups which is not a good place to be in. This is because veganism and nutrition research never seem to agree with each other when questioned – does red meat cause cancer? Vegans say it does while research is still undecided.

Ethically speaking, I am against consuming animal products, including red meat. But to remain objective, I am addressing this topic from a nutrition perspective.

The Difference Between Processed and Red Meat

“Processed meat refers to meat that has been transformed through salting, curing, fermentation, smoking, or other processes to enhance flavor or improve preservation. Most processed meats contain pork or beef, but processed meats may also contain other red meats, poultry, offal, or meat by-products such as blood.”

The IARC Classification of Carcinogens

The International Agency for Research on Cancer (IARC) is a part of the WHO. It researches carcinogens and classifies them into groups. Its analysis was last updated in 2015 after considering more than 800 studies on cancer in humans. The panel consisted of 22 experts from 10 countries. Here is a simplified version of the classification. For a comprehensive understanding, please read the IARC Preamble.

Does Processed Meat Cause Cancer?

Processed meat has been classified as a Group 1 Carcinogen as there is enough evidence to show that it causes cancer. This group also contains tobacco.

After crunching the world’s cancer statistics using advanced mathematical equations, I found out that tobacco mostly causes lung cancer while red and processed meat cause bowel cancer. Kidding, I just used this really nice infographic from Cancer Research UK’s website to get the stats. Clearly tobacco causes a lot more cancer than red and processed meat. 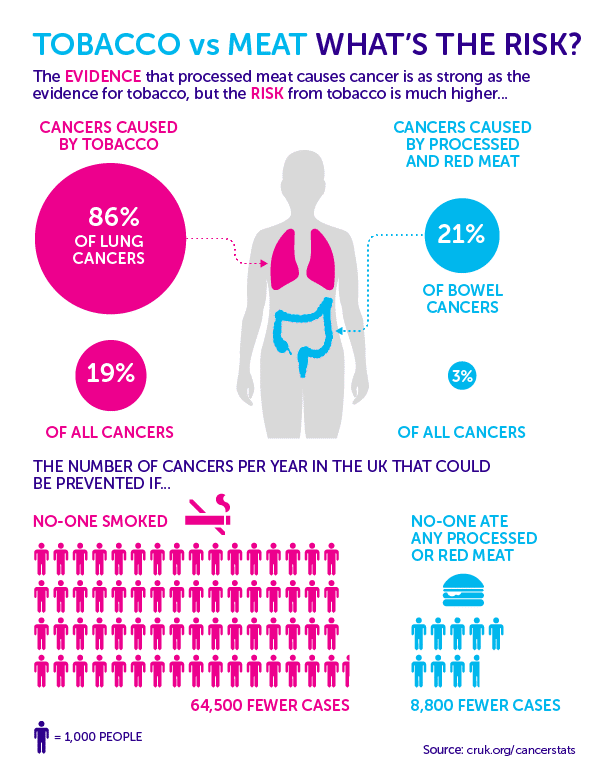 The Dose Makes the Poison

Everything, even the harmless aloe vera, has the potential to cause cancer. However, paraphrasing the 15th century physician Paracelsus, the dose makes the poison. So, a person who eats processed meat once a week does not carry the same risk of developing bowel cancer as a person who eats it several times a week.

Individual factors such as genetics also play a role in the development of cancer. You might have come across examples such as Kabir Singh who smoke, drink, and lead terrible lifestyles. This might lead you to believe that they desire cancer and not the movie’s actress. Yet, they don’t develop cancer, live a long life, and die smoking a cigarette in their deathbeds (’cause masculinity).

Then there are people like Zaheer from Munnabhai MBBS who develop cancer despite never drinking or smoking.

Kabir Singh, along with a broken heart, may also have favorable genetics which reduces his risk of developing cancer. Zaheer did not have the same genetic gifts. Because of this he dies of cancer.

Does Red Meat Cause Bowel Cancer?

Red meat is under Group 2A which includes substances that can probably cause cancer in humans. The data suggests that eating red meat is positively correlated with bowel cancer. Is it possible that red meat causes bowel cancer? Yes. But since the evidence is limited, it’s also possible that it doesn’t, and that the positive correlation can be explained by other factors such as bias or confounding.

How Much Meat Can You Eat?

Based on the IARC’s classification, many guidelines recommend limiting red and processed meat intake to 70 to 90g per day. However, there’s a caveat to the IARC’s 2015 classification – most of the studies used for their analysis were conducted in the 1990s or earlier.

A study published earlier this year points that we don’t eat the way we ate in the 1990s. After considering current dietary patterns, the study found that even when people ate 76g of red and processed meat per day, it increased their risk for bowel cancer by 20% when compared to people who ate only 21g. Notice that 76g falls within the current IARC recommendations.

This study is important as it was conducted in over 175,000 British men and women between 2006-10. Therefore, the safe limits of red and processed meat consumption could lie between 20 to 70g per day.

The epidemiology of cancer is complex. Scientists are still struggling to understand what causes it.

We still cannot say if red meat causes bowel cancer. However, there is a positive correlation between them. Just to be safe, you might want to limit your red meat intake to less than 70g per day until more research emerges.

P.S. – While red meat may or may not give you cancer, not eating it will certainly save a lot of animals from being killed for food.

Is there a Best Diet for Weight Loss? - Element Nutrition

Detox Diets Part 1 - Are they Effective at Detoxification?

[…] POPs are industrial chemicals found in flame retardants, pesticides, paints, coolants, and lubricants which accumulate in adipose tissues. POPs like heavy metals can even accumulate in the bones. They enter our bodies through things like plastic packaging, processed food etc. They are found in greater concentrations in animal products such as meat and dairy (this simply adds to the multiple non-nutritional hazards of animal products). […]

The Game Changers Debunked by a Vegan - Element Nutrition

[…] I have written about the relationship between red meat and cancer which is also something that is spoken about in the documentary. You can read my article here. […]

In this regards i can give some inputs. We have medical tourism collaboration with Bangladesh. Almost 60-70% Bangladeshi patients we handle regularly who comes with digestion problem and also infertility and pressure problem.Liver expanse,fatty liver are very common in them. Consultant with drs and also my self Enquiries and study show that basically huge red meat intaking and uses of huge chilli mostly dry chilli are the cause of liver and infertility problems of them. Bangladeshees are too high intaking people of red meat mostly cow.96% of indian cow flesh exports there..coming to wholstic management we control there diet mostly red meat, increase herbs use and exercise also..But we get cancer very few in no.

It is my experience which i shared

Thank you for your comments Anindita! I’d say that it might be prudent to limit red meat intake based on the studies I have red and your experience also seems to point in the same direction.