How Ramya Gained 13 Kilograms on a Vegan Diet

Weight gain is no easy task. Which is why today, I am writing about how my client, Ramya Sekar, gained 13 kgs in 6 months on a vegan diet.

Ramya had always been quite thin since birth. During college, her weight fluctuated between 45 and 50 kilos. During pregnancy, she weighed 50 kilos. Generally, women aim to lose weight after childbirth. However, Ramya’s weight decreased to 39 kilos after delivery. This was even lower than her weight before pregnancy. To make things worse, she also contracted typhoid in late 2019 that led to further weight loss.

Ramya has also been vegan since 2018. She and her husband, Natarajan, had consulted multiple health professionals to help her gain weight. Unfortunately, all of them told her that she won’t be able to gain weight on a vegan diet.

Natarajan began to grow concerned about her health. This is when they vaguely remembered stumbling across a Facebook post of mine in 2018 announcing that I had just become India’s first MNU-Certified Nutritionist and decided to get in touch.

Eating more to gain weight is not easy

Ramya needed to gain weight and she told me that no diet seemed to help. When it did, she was not able to sustain the diet for too long. This led her to lose all the weight she had gained, bringing her back to square one. During my assessments, we found out that the main issue was her appetite. She would feel full after eating just a small portion of food.

People often have this misconception that weight gain is very easy and not as difficult as losing weight, “You have to just eat more. How difficult can that be?”. Let me tell you, it is as difficult dieting to lose weight. Think of it like forcing yourself to become a glutton. 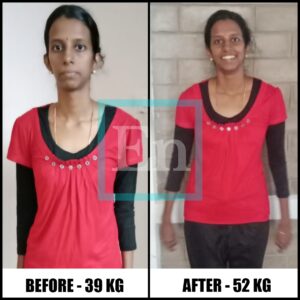 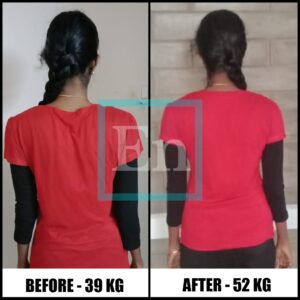 She needed to eat more food to gain weight, but we needed to understand exactly how much her appetite would allow her to eat. We spent a couple of weeks experimenting with various food quantities so that I could personalize the diet to her appetite. Initially, we increased her food intake to 2200 calories (which was close to what I ideally wanted her to consume), but that left her feeling nauseated after most meals.

To make it easier, we settled on a diet that made her eat only slightly more than before. It still caused some discomfort, but it was bearable. Since she is a working professional and also has a 5-year-old daughter to take care of, we came up with a diet that uses common ingredients and recipes which are quick and easy to make.

This was probably the most important aspect of her plan. To ensure that she stayed consistent with the diet, we tracked various things such as:

Her low appetite was a major limiting factor in her progress. An increase in appetite would indicate positive progress. The best way to measure this was to track her hunger before and fullness after each meal over time. We found out that both she was feeling excessively full during the second half of the day during her evening snack and dinner. However, she felt like she could eat more during breakfast and lunch. So the best solution was to shift some food from the second half of the day to these 2 meals.

The quantities of carbohydrate, fat and protein are important but not more important than total calories. To gain weight, it was necessary that she consistently remained on a calorie surplus.

My next biggest concern was low protein intake. Moreover, she is vegan and a vegan diet can be low in protein if not planned carefully. I more than doubled her protein intake as it would help her increase muscle mass and improve overall health. We tracked protein using various methods such as photographs.

She gained 6 kilos in the first 3 months.

The first 3 months were riddled with challenges. This included falling sick a couple of times, shifting to a new place and adjusting to working remotely during the COVID-19 lockdown. During these times, there was a greater chance of her appetite and consequently her rate of weight gain reducing.

To help her gain weight consistently, we modified the diet multiple times by taking measures such as: 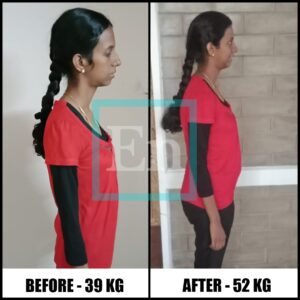 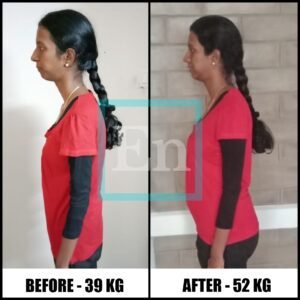 The next 3 months were relatively easier. Most of her major issues were taken care of by this time so we worked on more minute details such as

Her appetite had increased, and, on some days, she was even eating more than what was given in the plan. In the last 2 months, we stopped tracking food intake since she was able to eat a larger amount without putting in conscious effort. We only tracked weight and occasionally protein also to make sure they hadn’t reduced.

At the end of 6 months, the diet plan had been exposed to so many different situations that it could be used in all the cases.

At the end of 6 months, Ramya had gained 13.4 kilos, her BMI had normalized and her appetite was much better. Most importantly, along with weight gain, she had also gained the confidence to be able to maintain the new diet without my assistance.

I also need to commend her husband Natarajan because he signed up for a weight loss diet with me just to give her company. He also did most of the cooking for her and customized everything as per my instructions.

Personally, I felt inspired by Ramya’s consistency and focus on the process rather than the outcome throughout the plan. Her stellar transformation would not have been possible without her own undying dedication to the diet.

I’ll end this article by sharing her experience of working with me.

“What is your guess for the lowest weight that a fairly tall lady in her early 30s and a mother of a 5-year-old kid? Well, I weighed 39kgs. Yes, you read it right. To make it worse, I am vegan for I have lactose intolerance. After signing up with Sanket, weight gain has not only been easy but also enjoyable. His whole program is customised to the T and factors in the timings and regular food items in your kitchen. The boy knows his stuff and helps us understand food science better. The fact that he listens more than he speaks is a trait that will take him far. I am currently at a healthy 52kgs after 6 months of his diet without having to alter my food choices. I highly recommend Sanket for anyone struggling with nutrition issues to get better in the mind and body. Wishing Sanket the very best in all his endeavours!”

[…] kilos in 3 months despite multiple challenges. Anitha approached me after reading about her friend Ramya’s weight gain experience with […]