We live in an era where the tastiest of foods, such as mithais, are easy to access. If you live in India, I can bet that it will take you less than 15 minutes to find and buy your favourite mithai from your nearest Mithaiwala. Luckily, we also live in an era where Mithaiwalas, such as my friend Tanay Agarwal, also offer healthier mithais. And yes, I just used the words “healthy” and “mithai” in the same sentence. Am I out of my mind? Read on to find out (and watch our video as well)!

It is a sweet which is typically made from dairy products, with the most common ingredient being khawa i.e. fat derived by boiling milk for long periods. Many mithais also use ghee or clarified butter to enhance their taste even further. Essentially, it’s a calorie bomb.

On top of that, India has an endless variety of mithais to choose from, multiple religions and therefore, at least one major festival every month. With more festivals come more opportunities to savour mithais.

If you have read my take on dieting during festivals, you know that I don’t recommend dieting at that time in most cases. But you don’t want to go overboard either. This is easy for me to say but it’s hard to resist the temptation when you’re surrounded by mithai and family members who want to stuff your face with it (hello weight gain).

Most mithais get their excess calories and sweetness from sugar. For example, one Dharwad Pedha can contain as many as 150 calories in total, with around 50 calories from just the added sugar. 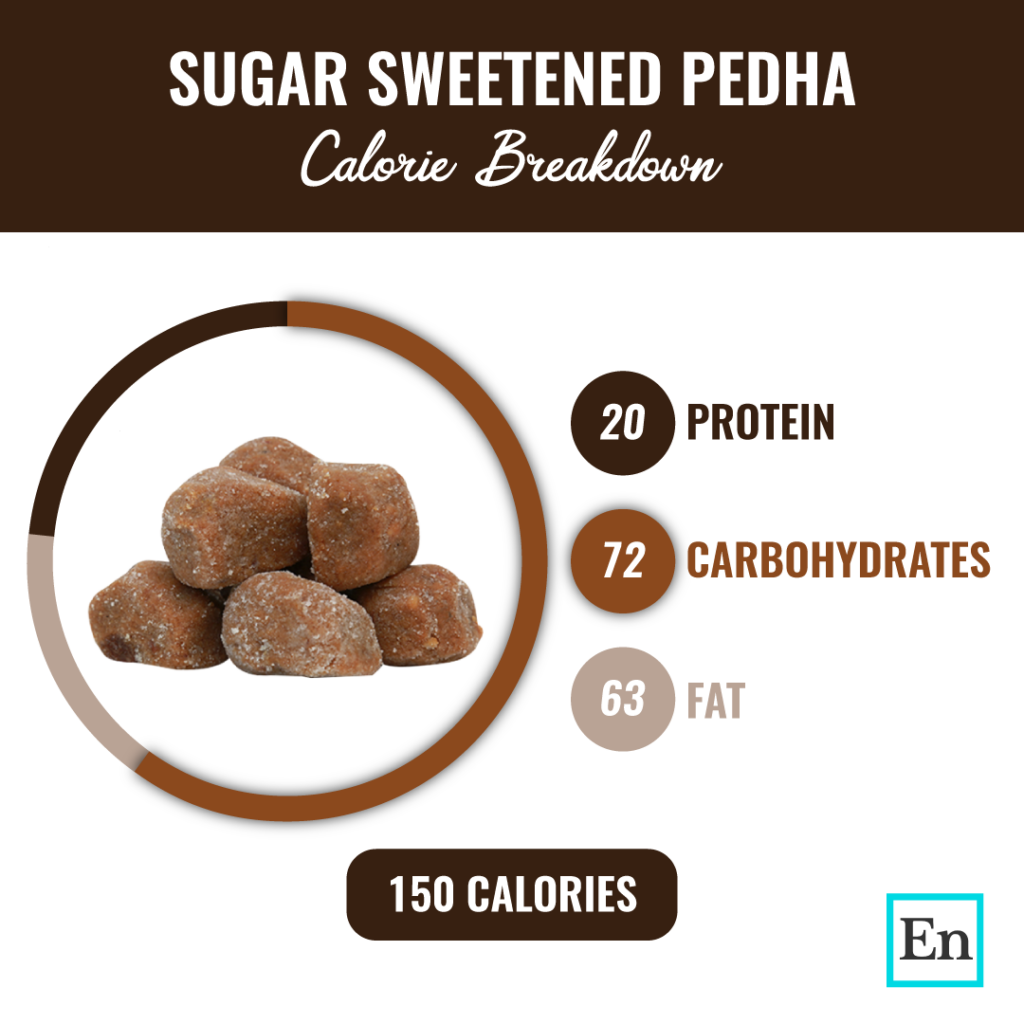 No one likes the extra calories that sugar gives but it’s the compromise that we make to enjoy our favourite treats. We are hooked to mithai because of the sweetness sugar adds, remove the sugar and it’s not so appetizing anymore. But wouldn’t it be nice if we could still experience the sweet taste of sugar without all the calories? Luckily, it can be done.

Artificially sweetened mithai replaces sugar with artificial sweeteners like aspartame which drastically reduce calories because artificial sweeteners are (almost) calorie-free. For example, if you were to swap the sugar in the Dharwad Pedha with aspartame, the calorie content reduces from 150 to 102 calories. 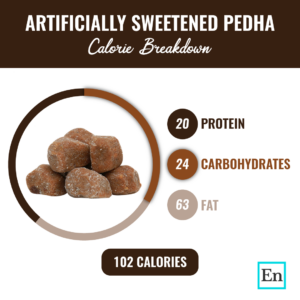 So, if it’s the sweetness you are after, choose artificially sweetened mithai instead. This way you’ll avoid the calories from sugar but still experience the sweetness.

Aren’t Artificial Sweeteners Bad for You?

In short, no. Artificial sweeteners are chemicals that taste like sugar but also breakdown rapidly within the human body. Although they were introduced as a sugar alternative for diabetics, they are safe to consume even for normal people.

Multiple authorities around the world have declared them to be safe. However, there is some research that mentions it might be harmful. Even if I were to accept this risk to be true, artificial sweeteners tend to be a lot sweeter than sugar, and therefore, the quantity required to achieve the same amount of sweetness is very small. For example, the artificial sweetener aspartame is 200 times sweeter than sugar and you don’t need more than a gram to achieve the sweetness that you get from 10-15 grams of sugar.

If you’d like to know more about the research, then you should check out this post where I have covered this topic in more detail.

We rarely buy just one or 2 pieces of mithai. In India mithai is generally bought in bulk by families (usually a few kilos). The calories can quickly add up as you consume one mithai after another during festivals. Artificially sweetened mithai is great if you are trying to lose weight, especially during festivals when you will be very tempted to eat at least a few mithais.

For example, if you were to consume just 5 pieces of mithai which contain 100 calories per piece, that’s easily 500 calories. To put this into context, 500 calories is what you get from an average homemade Indian meal. Let’s assume each piece contains 40 calories from sugar, then 200 calories out of the 500 total calories are coming just from sugar. Artificially sweetened mithai can help you avoid these 200 calories and either prevent you from gaining weight or at least reduce the amount of weight you gain during festivals by giving you the best of both worlds – calorie control and bliss.

I’d like to thank Tanay Agarwal for featuring me on his YouTube channel Mithaiwala. He also offers mithais made from khajur pak and anjeer pak which avoid using sugar and instead derive their sweetness from dates and dried figs. He can also be found on Instagram as _mithaiwala_. Don’t forget to check it out for some fun content on mithais.

Aspartame: Is it Safe to Consume? - Element Nutrition

[…] Don’t get me wrong, I am not saying that sugar is bad, but cutting out sugar on a weight loss diet will remove a lot of unnecessary calories. If you have a sweet tooth that comes in the way of weight loss, you must check out my article on artificially sweetened mithai (sweets) for calorie control.  […]